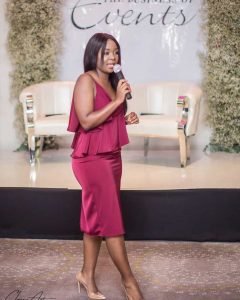 “17yrs ago, my media journey in Zambia began with an internship at ZNBC. After graduating in 2005, I then started my 1st Job at Muvi TV. The pay was extremely low and we worked out of a relatively small studio. There was no big social media following, no corporate endorsements, no makeup lol JUST PURE PASSION. Initially it was not financially rewarding, but passion pushed us. I worked long and hard hours for the love of the job. Years later, a few things have changed, but never for a moment be fooled into thinking it came on a silver platter for us.
Alot of young people ask me, “how can I be famous?” Truth is I don’t know… That was never the goal for me. The influence came as a by-product of the work I put in. So to any young person out there contemplating the media route… PUT IN THE WORK! “

Lulu was born Luyando Haangala in 1984 the first born daughter in a family of four. Lulu did two years of her primary education in Zambia the rest of it, including secondary education, was done in Zimbabwe. She was educated at Baraton University in Kenya where she did her first year of University. This, however, did not work well and she instead relocated to Cape Town, South Africa, where she studied for 4 years and has a B.A. in Communications and a Minor in Business degree in 2005 and also has a certificate in Diplomatic Practice and Protocol through the Zambian Institute of Diplomacy and International Studies in 2008.

Lulu’s career first started at the age of four, singing with her father in different churches around Zambia, Botswana and different towns in Zimbabwe. Lulu has ministered on stage through music and had the privilege of being invited to sing for Zambia’s first republican President Dr. Kenneth Kaunda at the age of 6. Lulu’s first real job was being a maid for a white missionaries at Mwami Hospital in Chipata. She was then promoted to work in the A.D.R.A (Adventist disaster Relief Agency) office at the same hospital through her hard work she got sponsored for her first year of high school. Lulu also tried a number of income generating projects whilst at school. She ran a hair Salon in her university room, worked as a student librarian, student English tutor and was also a production assistant for the Hope Channel Zambia.

Lulu started her career at MuviTV, where she quickly rose to hosting a multitude of shows including The Big Win Games. Lulu is a household name and celebrated personality because of her television presentations on the international Hope Channel, Muvi TV and ZNBC and for her radio interviews on radio Phoenix, Hot FM, QFM, Hone Radio and Zambezi FM in Livingstone, Zambia. In the final months of 2014 she was shortlisted for the African Social Media Personality of the year awards, making the final three.

In 2008, she started the #WeKeepMoving foundation inspiring youth to build meaningful lives and careers. Her commitment to this cause caught the attention of the US Embassy, culminating to her selection for the Mandela Washington Fellowship, which sent her to the White House to meet US President Barack Obama and 40 other global leaders.

In 2015 she has also been a moderator at the Global Magna Carter Forum in Washington, where she spoke on Gender equality, meeting Prince Charles and thought leaders on global issues.

Lulu Haangala has taken Zambia by storm and continues to build her empire one step at a time. Here’s to Lulu Haangala Wood, a woman to be celebrated! Check out this video if you would like to know more about her on a lighter note.